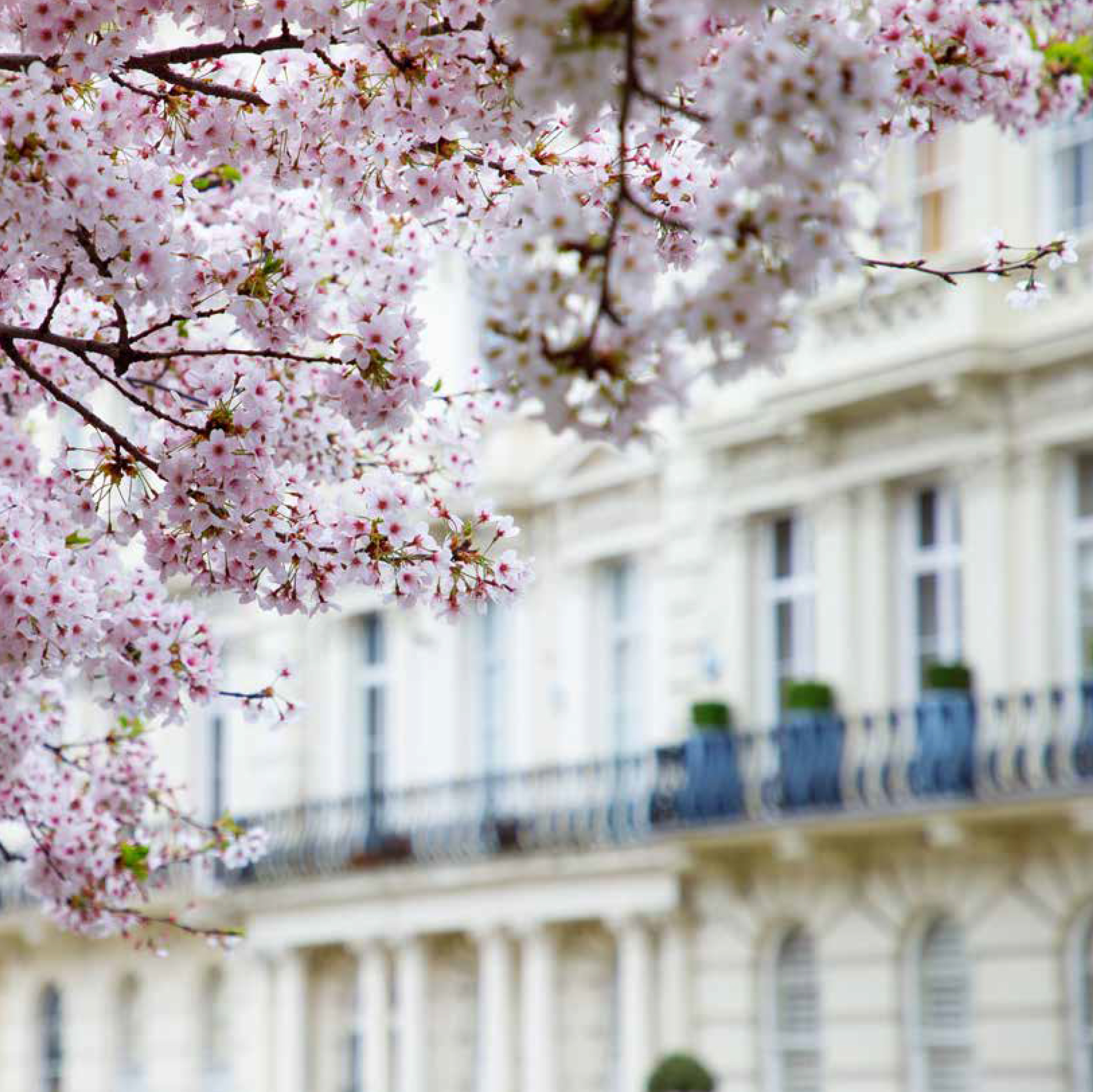 We understand now more than ever how important our homes are to us. We also understand what makes an exceptional home worth investing in and worth spending time in. We know how important open spaces are for our physical and mental wellbeing, and the importance of having space to rest, relax and reflect. This is why we focus on some of the most prestigious areas in and around the Hyde Park catchment. Our properties preserve and embrace iconic English heritage characteristics whilst creating homes for the modern lifestyle. Our experience allows us to create the perfect London residence.

Euroterra Capital is known as ‘London’s premier garden square property developer’ with all of its properties sitting close to the capital’s prestigious Royal Parks. 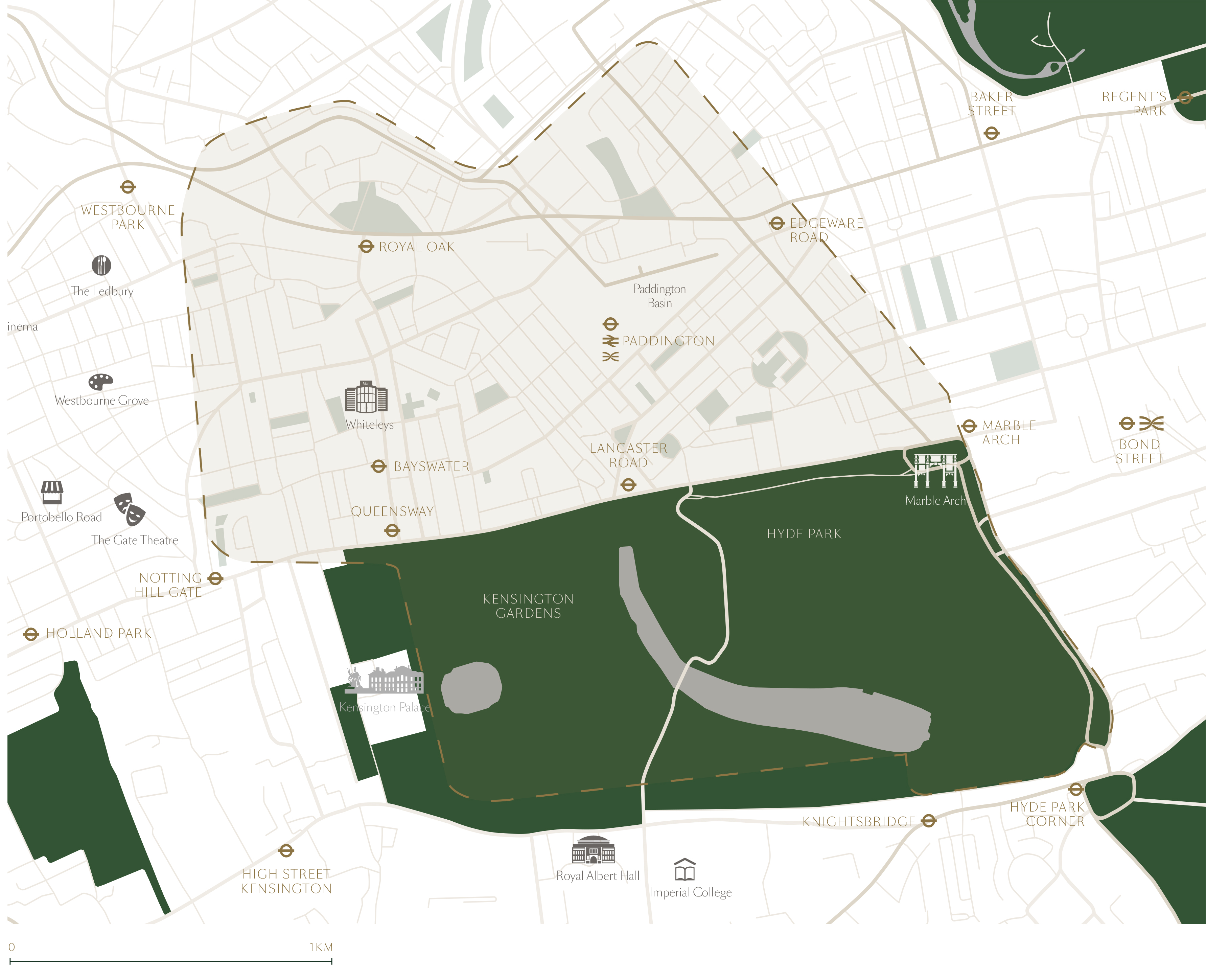 Being within walking distance to over nine tube stations, as well as having access to both the Elizabeth Line (Crossrail) and the Heathrow express from Paddington Station, makes W2 one of the best connected postcodes across London. 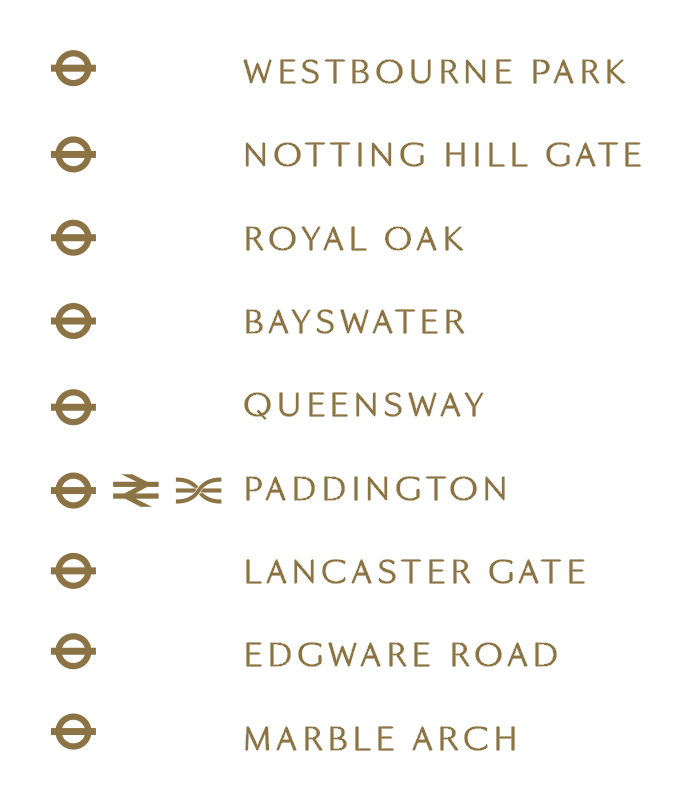 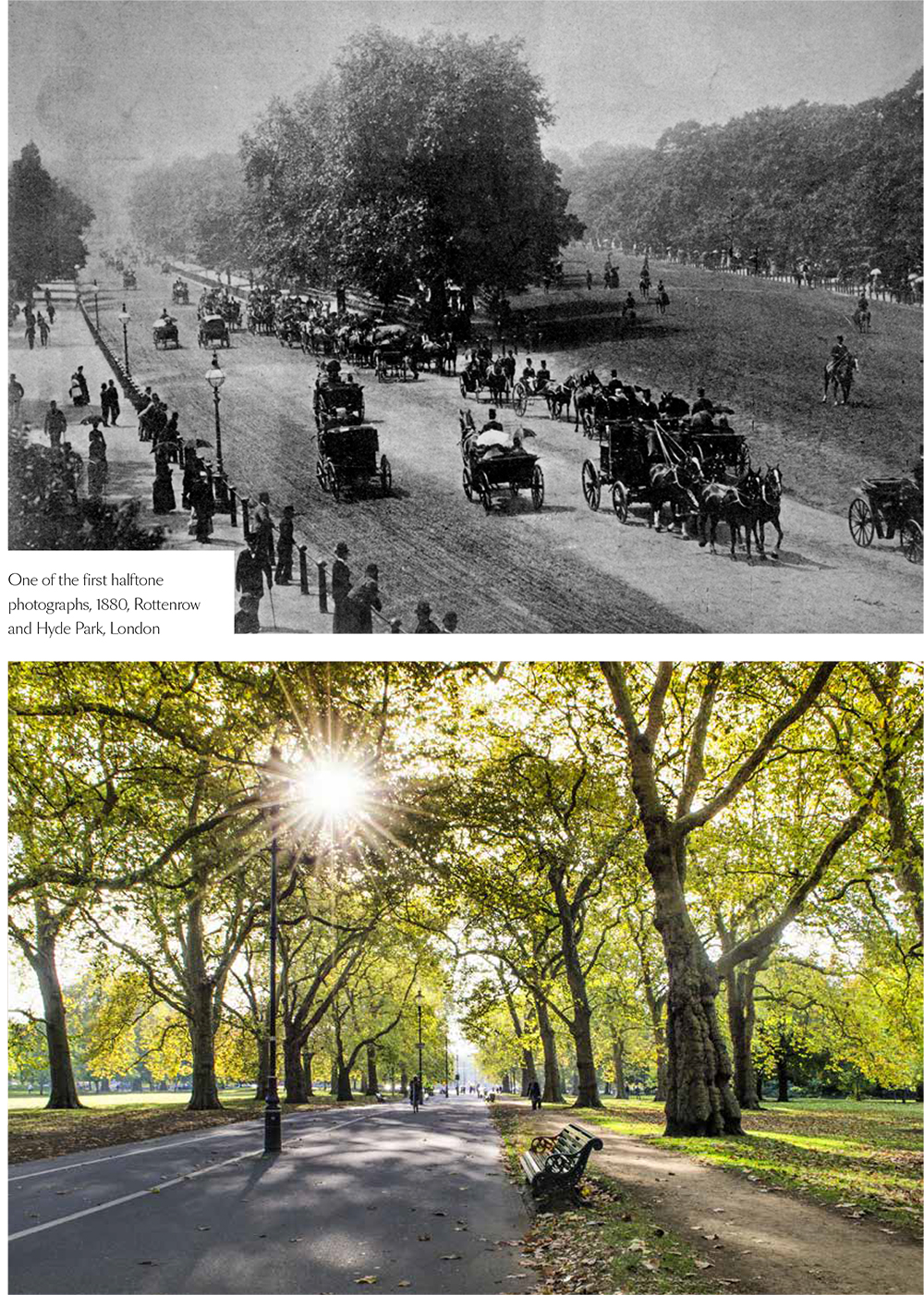 Hyde Park is London’s largest and finest green space and one of the city’s eight Royal Parks, covering 350 acres. At its epicentre is The Serpentine Lake, home to a number of historic monuments, including the Princess of Wales’ Memorial Fountain. An icon of London’s rich heritage, Hyde Park stands out for its vibrant history, expansive open spaces and stunning Victorian architecture.

Henry VIII acquired Hyde Park from the monks of Westminster Abbey in 1536. The infamous monarch and his court were often seen on their horses, thundering through the trees on the hunt for deer. Later Queen Caroline, wife of George II carried out extensive renovations and was responsible for the creation of The Serpentine Lake. However, it was the Victorians who truly made Hyde Park into the area we know today. One of the most important events to take place in Hyde Park was the Great Exhibition in 1851. A celebration of modernity and design, this had a powerful impact and resulted in the Victorians introducing the decorative flowerbeds, sculptures and fountains that can now be enjoyed across the park.

With a 200-year history, Hyde Park remains one of the most prestigious addresses in central London.

Hyde Park is surrounded by an abundance of large townhouses, period apartments and traditional mews homes that are characterised by Georgian and Victorian architecture; many of the grander townhouses are Grade II listed and white stucco fronted. Resided in by British Aristocracy for over 200 years, since constructed in the 1800’s under Queen Caroline’s rule, the homes here are special for their outlook over the Royal Park or views across London’s private garden squares, which are dotted around nearby Paddington, Kensington, Mayfair and Belgravia.

As well as an attractive aesthetic, the area offers residents easy access to a variety of quaint, boutique shops and cafes in the desirable retail quarter known as ‘Connaught Village’. Living in Hyde Park is not only a welcome escape from the hustle and bustle of the Capital, but is well located for schools, the shopping amenities of the West End and has excellent bus, tube and railway links across all of London and the UK.

Hyde Park has been home to British Aristocracy, royalty, pioneers of literature, science and engineering and a number of famous faces over the years, including, Winston Churchill, Keira Knightley, Stella McCartney, and JM Barrie, author of Peter Pan.

Today, Hyde Park plays host to a number of prestigious live music events, festivals and ceremonies and people from all over the world mingle with locals to enjoy the beauty of its walking trails, cycle paths, sporting pursuits and nature in the city.

The Regeneration
Of W2 Makes For
A Smart Investment

The historic area of W2 is the postcode district in West London incorporating areas of Paddington, Bayswater, Hyde Park, Westbourne Grove, Little Venice, Notting Hill and also sits within the prestigious boroughs of Westminster and Royal Borough of Kensington & Chelsea. Over recent years, the area has received huge investment with significant infrastructure projects helping to modernise and regenerate the area, whilst keeping the historic charm and cultural importance of the locality.

The £182 million development of the iconic Whiteleys shopping centre is based around delivering an enhanced retail experience, a residential development and new leisure facilities, including a luxury Six Senses hotel and spa. It will restore Whiteleys once again to its rightful position at the heart of Bayswater. Alongside the plans for the building, Queensway itself will be rethought in order to become more pedestrian friendly and give it a new lease of life as a key London thoroughfare once again.

W2 is a dynamic and exciting
place to invest.

Crossrail is a new cross city rail line. The rail line passes through Paddington and goes all the way from Heathrow to Canary Wharf. To date £17.8 billion has been invested in this project to provide high-speed travel across the capital.

The regenerated Paddington Basin has become a new destination for business and high-spec homes. Over £2 billion has been invested in the location with 27,000 jobs introduced, 35 new companies have relocated here, and over 900 homes were completed. This area is set to become a knowledge- based hub for aspiring minds and businesses. 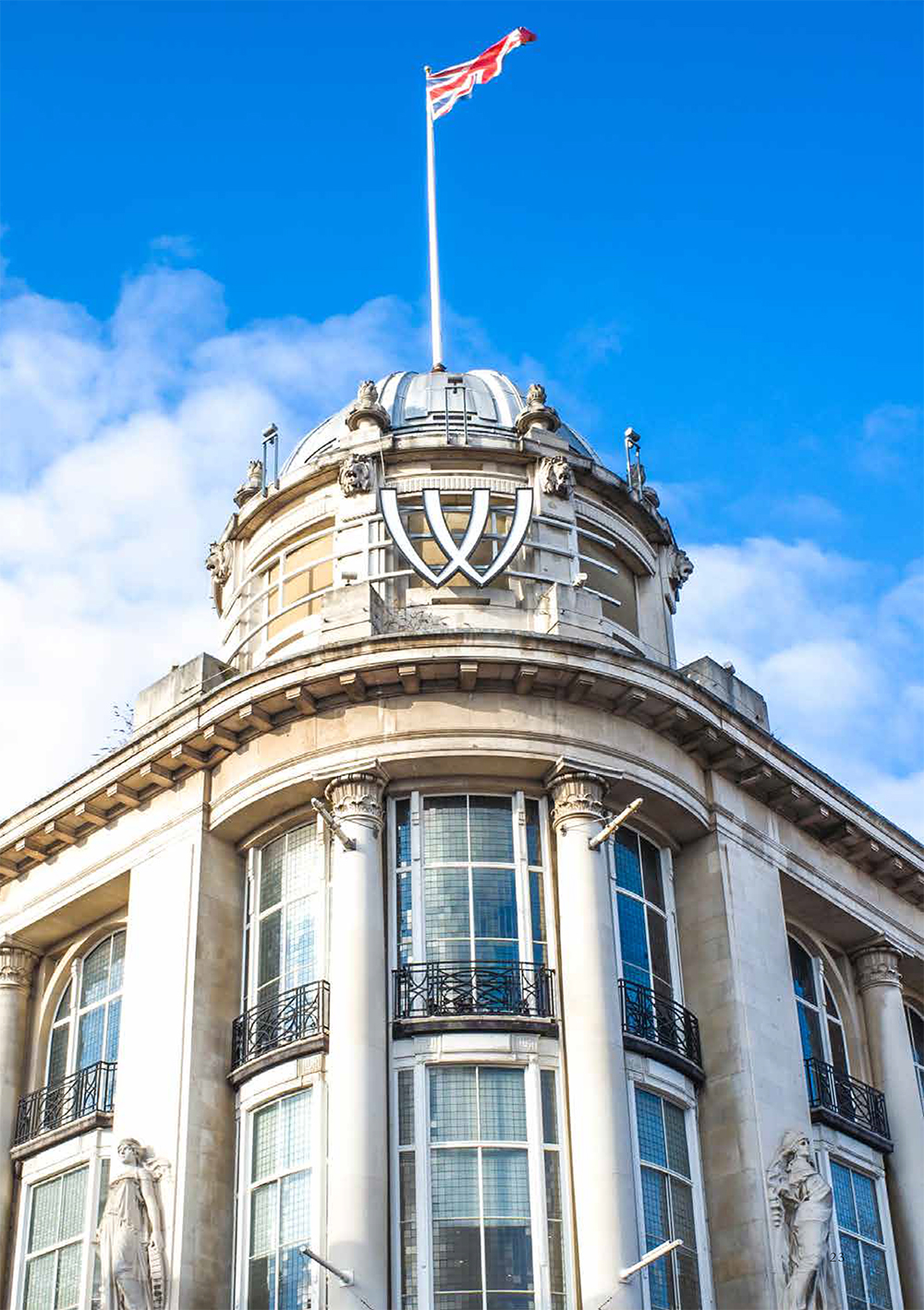 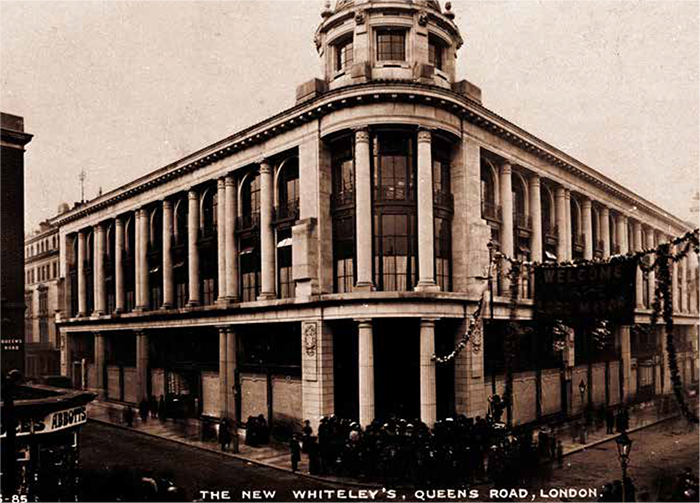 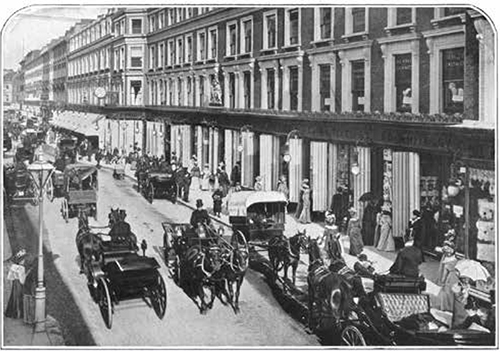 Whiteleys, which took its name from ‘visionary entrepreneur’ William Whiteley, opened in the 1800s. It was London’s first department store and it is now an iconic Grade II-listed property.

Whiteleys is currently undergoing a complete redevelopment. The regeneration of Whiteleys represents a truly unique and privileged opportunity to transform this historic landmark for 21st century life. The new development is set to include two 10-storey blocks playing host to 123 luxury abodes. It’s also set to feature a 30- room boutique hotel and a ‘subterranean leisure complex’ playing host to a cinema. There are also plans for a courtyard to be lined with retail units and restaurants. 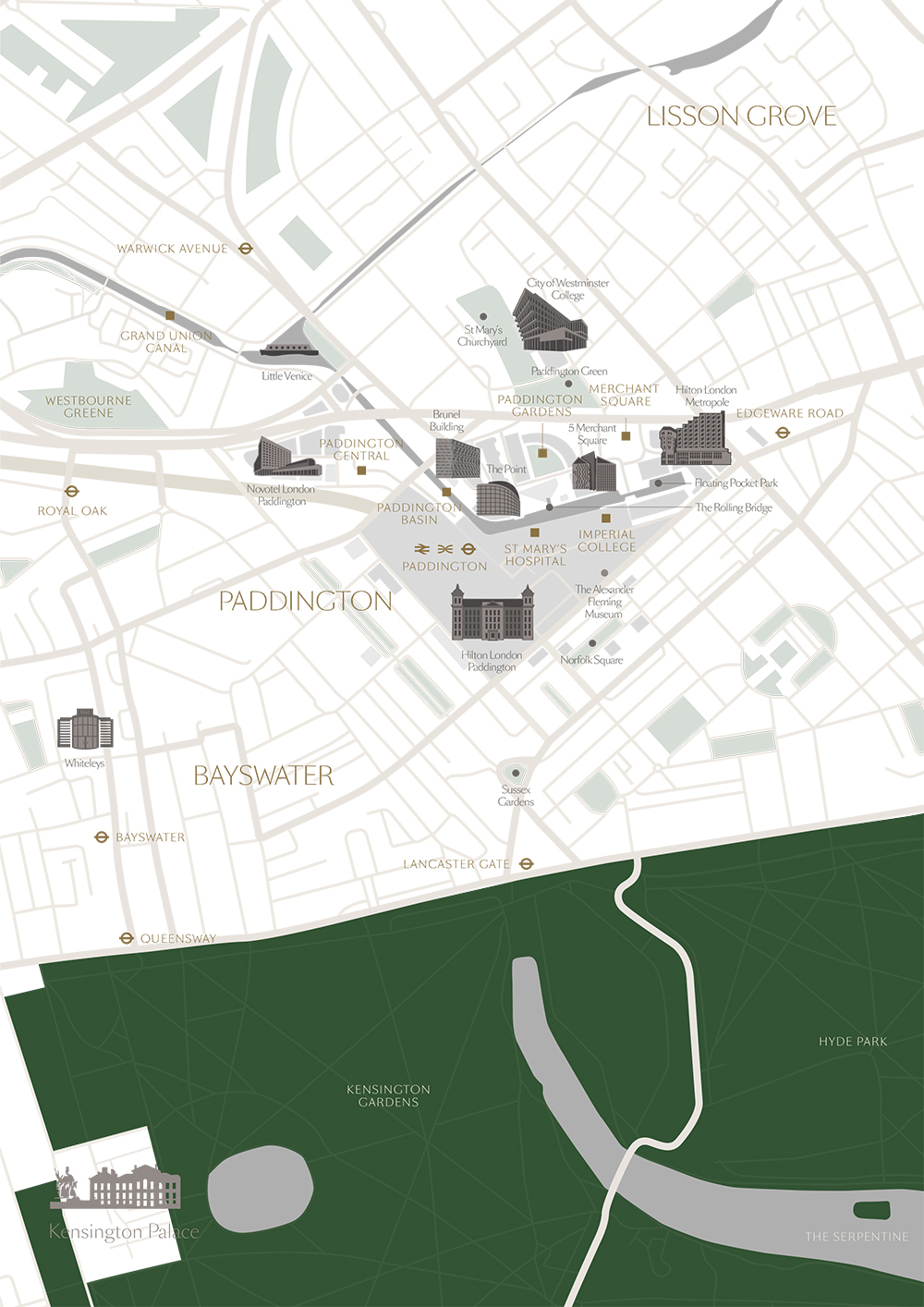 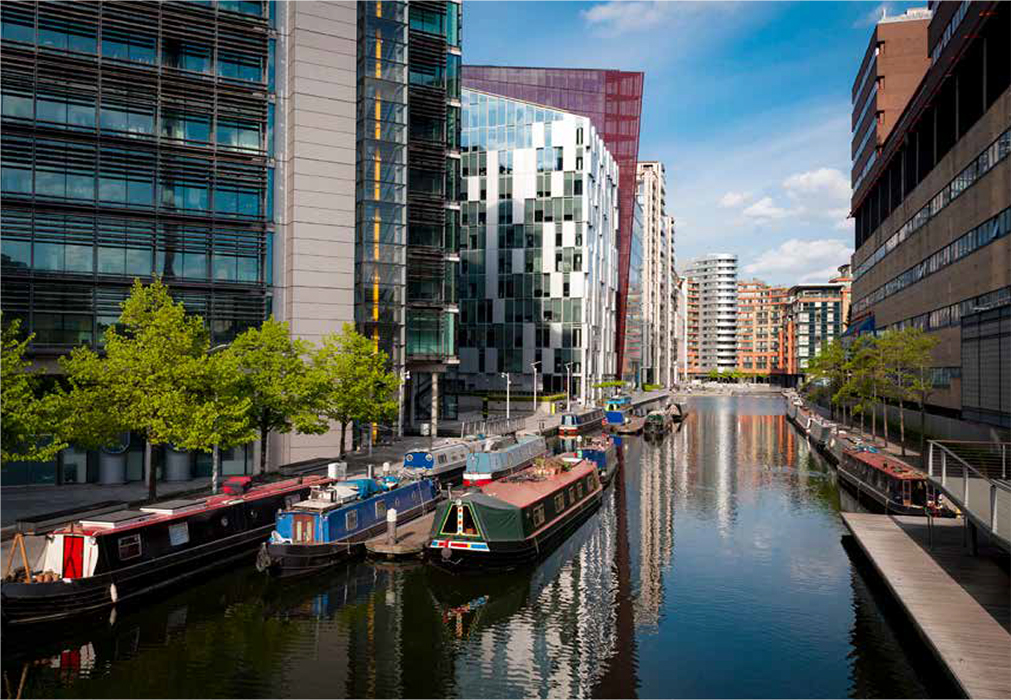 Paddington is an area of West London located between two Royal Parks, Notting Hill and the West End, where you can find pretty parks, gardens, cafes and colourful canal boats. Paddington is known as a property, cultural and historic landmark, as well as one of the main transport hubs in London. It’s only a few minutes’ walk from Paddington station to Hyde Park and Kensington Gardens, Regent’s Canal and the area of Little Venice.

The long canal basin and its surrounding area in Paddington was originally known as the Paddington Basin and all the land to the south was developed into housing and commercial property. Since 2000, the basin has been the centre of a major rebuilding as part of the wider Paddington Waterside scheme and is surrounded by modern buildings.